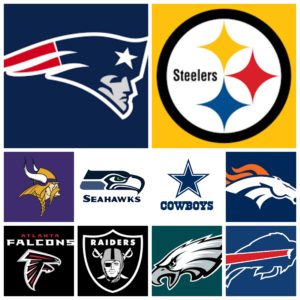 The best coached team in the NFL should continue to dominate opponents now with Tom Brady back. The Patriots defense also gets a boost with Rob Ninkovich returning, not to mention Brady makes every single offensively player better. Look for Martellus Bennett & receiving running back James White to also become focal points of the Patriots already potent offense

Ben Roethlisberger is playing as elite quarterback as you can play in the National Football League and when Le’Veon Bell is in the lineup, this is hands down one of the best teams in the league. We still would like to see more from the defense, especially in the secondary but Cameron Heyward & Stephon Tuitt remain an underrated pass rushing threat for the Steelers

Mike Zimmer is doing an outstanding job in Minnesota after losing his quarterback and all world running back but what is perhaps most impressive about the Vikings is their front 7 and improved defensive back play. The Vikings are Super Bowl contenders as long as their defense stays healthy.

The Cowboys have incorporated their philosophy of 2014 and it is paying off big time. The offensive line and run game are keeping their defense off of the field and Ezekiel Elliot is taking right where DeMarco Murray left off. Player’s like Mo Claiborne and DeMarcus Lawrence appear to be ready to take their next developmental steps on defense as well. Dak Prescott’s calm & poise behind center is truly impressive. If Barry Church & Sean Lee can stay healthy the Cowboys may have more of a complete team than the world might have thought.

The best secondary and best pass rush in the league, when healthy, but DeMarcus Ware is an underrated loss to the defense as a whole. It really doesn’t seem to matter whether Peyton Manning, Trevor Semien or Paxton Lynch are at quarterback, although Semien has looked impressive at times. The main question for us is, can the Broncos defense carry them through an entire season yet again?

Very impressive what the Falcons are doing with their run game duo threat of Tevin Coleman & Devonta Freeman. We all knew that Julio Jones was capable of blowing the top off of any defense but these duo threat running backs in both the running and passing game has made the Falcons a Top 5 offense in the NFL. The defense is still the question mark and it is why they are only ranked 7 on our list but if the Vic Beasley coming out party continues (3.5 sacks in Week 5), then the Falcons could be for real.

Derek Carr, Amari Cooper & Latavius Murray all have arrived. It’s very impressive to see how this offense has progressed since Carr’s arrival. We’re not sure what is going on with this Jack Del Rio led defense however and what is Khalil Mack doing so far this year? The Raiders are an impressive young group that is ready for the playoffs but don’t crown them yet, they’re is still developmental days ahead.

Carson Wentz has been outstanding for the Eagles but what is perhaps most surprising is the Jim Schwartz led defense that suddenly has the Eagles looking like a contender. The run game is still questionable with Ryan Matthews and new offensive line faces, it is also still befuddling why Darren Sproles doesn’t have a bigger role in the offense. Until the Eagles get the ground game right they are going to stay around 9 in our rankings or off the Top 10.

The Bills have won 3 straight games all against formidable opponents (Arizona Cardinals, New England Patriots & Los Angeles Rams) it appears that Rex Ryan has finally got his defense right in Buffalo. Zach Brown & Lorenzo Alexander are absolutely balling at linebacker and the secondary is playing solid as well. Keep riding LeSean McCoy and if Sammy Watkins can make a late reason return & find his place in this offense, then the Bills could be a playoff team in 2016.

Could the Oakland Raiders be headed to Las Vegas?