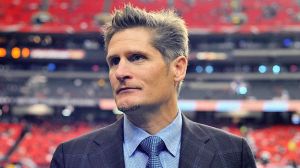 Oh, how the interesting story continues to write in Atlanta.

It may not be the most enticing job, but somehow the Falcons have made their mess a hot topic when it comes to discussing coaching vacancies in the NFL. Did the firing of Mike Smith who served as the team’s head coach since 2008 come as a surprise? To a majority of those who followed the team closely, no.

The Flacons didn’t deliver on preseason expectations and somebody needed to be held accountable. Period. Smith took full responsibility for the team finishing the year 6-10 so Smith was the one to go simple as that.

Before the 2014-15 campaign kicked off, it was clear that owner Arthur Blank wanted to see postseason life and at least a playoff win. It was either significant improvement, or it was time that the franchise move into a different direction.It’s hard to believe that just two years ago this was a team so close to heading to the Super Bowl. Now the Falcons ended their run at this season, looking outside of the playoff picture.

Not to mention, they went out in an embarrassing fashion with a 34-3 whooping from the Carolina Panthers in their own yard. The game that decided more than just the NFC South.

Back it up to 2012, after finishing the season 13-3 this was a team that was supposed to make some noise the following year and this time, reach the final game of the calendar. Fast forward to 2013, the season starts, the Falcons don’t come out of the gate running. Instead, they trip and fall into injuries early. Injuries, such as the one suffered by Julio Jones on his right foot five games into the season. Injuries, that not only claimed the prized Wide Receiver for the rest of that year, devastating anyone who was lucky enough to draft them on their fantasy team, but it also exposed the team’s lack of depth. A major factor in the disappointing results of a 4-12 campaign. It’s safe to say that Blank, along with ATL’s fan base had seen enough. To some, it may be too soon. To others, it doesn’t matter when you are teased with promise not too long ago.

During Blank’s news conference to address the dismissal of Smith, there was no hiding his frustration in what has been the past two years of disappointing football. If there was one point that he drove home that day, it was nobody’s job is safe. Not even General Manager, Thomas Dimitroff’s, who was sitting right beside him as he spoke. Blank, with no reservations, kept it straight when he said whomever was selected as the team’s head coach, would have plenty of say on Dimitroff’s position.

NFL Executive of the Year is a well-respected man. Pulling off an unforgettable, first-round trade during the 2011 draft that sent five picks Cleveland’s way in exchange for the 6th overall draft pick that would become Jones. Now we know how that trade worked out for the Browns, but how did it work out for Atlanta? Oh hindsight, you beautiful thing you. The trade gave the Falcons an offensive threat, but cost the team depth and with a 10-22 record in Dimitroff’s past two seasons to show for it, the debate on whether or not the bold move cost Atlanta big in the long wrong is legitimate.

With the recent announcement of the Falcons’ front office restructuring, moves are to be expected, but most likely won’t be made until the coaching vacancy is filled. The fun part. In the meantime, Assistant GM Scott Pioli has been given more responsibilities that include the handling of pro and college scouting as well as the franchises’ draft processes. Dimitroff has been put on cap control. Neither are off the hook of course, but the change up in duties could be a hint that Blank may be leaning towards keeping the pair, despite wanting to rely heavily on what the next head coach up has to say about where the team stands moving forward.

One man that both Pioli and Dimitroff silently should be routing for to end up with the job as well as the fate to their future in the palm of his hands, is the Patriots offensive coordinator Josh McDaniels. The three have history having worked together in New England.

Although McDaniels could be the piece to front office stability, it’s going to take next to a seamless set of circumstances for him to pick up and leave behind head coach Bill Belichick and of course, Tom Brady. Having an elite quarterback that can execute the way Brady can, has helped McDaniels shake off the awful tie to Denver.

McDaniels did say that his interview with the Falcon’s went “fine.” He also interviewed with the team that possesses the most attractive coaching vacancy out of the bunch and biggest you-know-what-block of the season for any team with a prized candidate, the San Francisco 49ers